skip to main | skip to sidebar

Who do you think you are?

Who do you think you are? It can be a pointed, sarcastic question suggesting that you think you are better than another. But in a genealogical context, it is thought provoking, and personally, gives me chills.

NBC is airing the first episode of the much anticipated American edition of Who Do You Think You Are tonight. The series has been running in the UK for quite some time now, and has been wildly successful, to say the least. I have seen a couple of the British episodes, and have to say, they were so incredibly well done they left me alternating between gasps, goosebumps and tears. So I’m hoping that NBC’s version follows suit.

But back to the question - who do you think you are? Most people don’t think much about their ancestors. They rely on their living relatives to tell them stories about family, but quite often those stories are recieved with glazed eyes and yawns.

My grandmother used to talk about people all the time - she seemed to know everything about everyone in the small town that she grew up and lived in for most of her life. Honestly, I didnt really listen too closely, because I didnt know any of the people she was talking about. But fortunately my sister did take some notes, and, being older, listened a little more closely.

I started researching my family history several years ago shortly after my father became interested in his. It was something that we could talk about together at first, but soon I was totally hooked. I was so grateful for my sister’s notes, which mentioned family members that there were otherwise no apparent record of. But other than that, it turned out that my grandmother wasn’t aware of a lot of her own ancestry.

I had always just thought that my ancestors were farmers from Northeast Ohio... that they’d been there forever, and that was the extent of it. That part is true. Most of my ancestors came to the Western Reserve in the early 1800s - some even before it became Ohio. They were the pioneers and settlers of the state. They built their homes and cleared and plowed field, organized church meetings and towns. They lived with Indians as their neighbors. The women had to make the cloth before they could sew their own clothes. They must have been amazing people.

One great grandmother went to the cider mill to collect apple seeds before she left Connecticut to walk to her new home in the Western Reserve. People laughed and told her they would never grow, but when she arrived at her destination she began planting and cultivating her apple orchard and within a few years, had developed an apple that she liked the best, and named it after her husband, Jonathan. 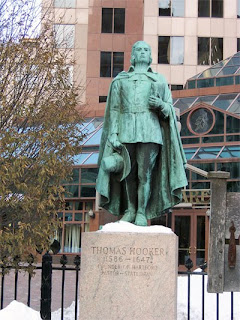 As I’ve researched my family earlier than the Ohio settlers, I’ve also uncovered several “big names” in my family tree - people with plaques and statues in town squares. People who were chosen to lead the new country in its early years... people who fought valiantly to even allow the new country to be born. I’m not so much impressed with credentials and titles, though, as I am with the stories of daily life -- stories of struggles and challenges overcome, and those that weren’t. My definition of heroism has changed to include women who bore and raised a dozen or more children, without the conveniences of electricity, as well as those women who’s hearts must have been broken as they watched infant and children die, year after year.

Who do I think I am? I think that I am the end result, so far, of generations of people who worked hard, lived, loved, and did their best to survive, as well as to enjoy life... people that probably didnt think much about their ancestors either, other than to learn from their parents, who had learned from their parents, and so on... it’s all there in my genes, inherent in my being, in who I am. I think that I am just me, and at the same time, I am the end result of the lives of all of my ancestors. And it makes me want to find them and know them even more.
Posted by relatively curious at 1:58 PM No comments:

relatively curious
howdy hi and thanks for reading!

Find me on the SpeakerWiki!

MyHeritage.com interviewed me. You can read it here.

All my favorite sites in one toolbar! E-mail me if you have any suggestions to add to it. Download it free at
http://RelativelyCurious.OurToolbar.com